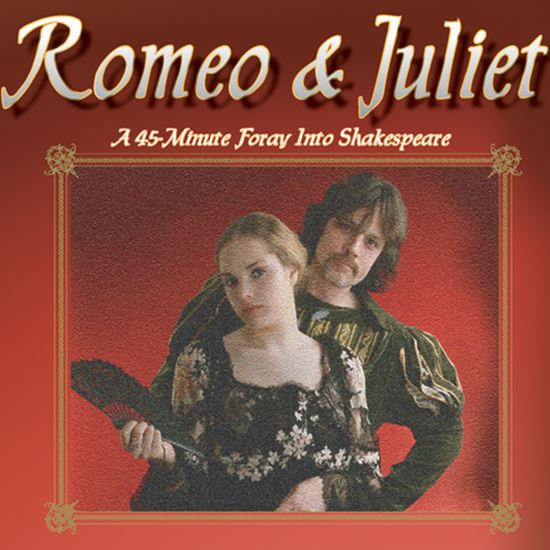 “Reading Shakespeare in class is akin to going to a restaurant and eating the menu. Shakespeare is meant to be acted and attended, not just words on a page.” With this belief in mind, playwright Rosina Mason Whitfield created this lively and shortened version of the Bard’s classic. It is specially designed to be played by 5 actors as a touring show to introduce middle and high school students to the wonder of Shakespeare in a way that is enjoyable and accessible. The show did in fact tour for two years to schools in Pennsylvania where students always loved the sword fights and kissing! Narration and observations by the actors further involve the students, helping them to see that Shakespeare’s characters deal with the same things kids deal with today i.e. conflict with parents, boyfriend/girlfriend issues, and neighborhood violence. And to show that violence doesn’t solve problems. Approximately 45 minutes.

A: At York Little Theatre we were doing a touring show for younger children and I thought we should produce one for middle and high school students too. The theatre did a full production of “Romeo and Juliet.” I played the nurse so I got to know the play really well. I remember sitting in English class myself being forced to read it and being bored. I fell in love with Shakespeare when I actually got to see it on stage. Having to read it in class is akin to going to a restaurant and eating the menu. It was meant to be acted and attended, not just words on a page. Hence the idea of this play was born.

Q: WHAT’S YOUR FAVORITE PART OR LINE IN THE PLAY?

A: I think my favorite line is when the Nurse talks about Juliet not going back to Paris, even if she could get a good deal at Expedia.com. The play on words and the modern reference just makes me laugh. Audiences laughed too. It is also fun to watch the surprise of kids when they learn that at the beginning of the play Romeo is already ready to do himself in over a woman who is not Juliet. And we loved the catcalls during the kiss and the gasps during the sword fights. We had great sword fights and kissing!

Q: TALK ABOUT THE CHARACTERS IN YOUR PLAY.

A: Of course the characters already existed from Shakespeare, but I had a lot of fun mixing and matching them up and creating so many characters with only 5 actors.

A: I wanted to get kids turned onto Shakespeare and show that it is fun, action packed and that the characters deal with the same things kids deal with today i.e. conflict with parents, boyfriend/girlfriend issues, and neighborhood violence. And to show that violence doesn’t solve problems. I also wanted to show young people that Shakespeare is accessible and exciting.

Q: DO YOU HAVE ANYTHING ELSE YOU WOULD LIKE TO ADD?

A: The play did well in both middle and high schools. When they laughed we knew they were getting the comedy and were into the action of the play. We often had a question and answer session after our performances. The best part was when they wanted to know more about the characters they had met.