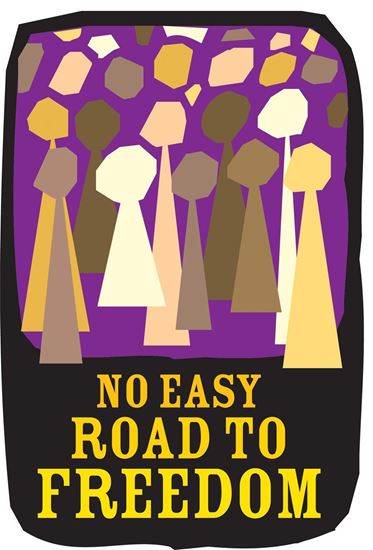 The road to freedom for people of diversity has not been easy in American History. Students will learn of the struggles for acceptance of a wide range of minority groups through poetry, drama, and song. Hear the stories that made America and that continue to shape our nation today. From immigration to oppression to acceptance listen to the stories of bravery and determination from the likes of heroines like Rosa Parks and brave individuals who represent Asian, Italian, Latino, Jewish and Native Americans. It has been no easy road, but students can see that history constantly changes and unfolds and they are part of the American Mosaic. About 35 minutes. Ideal for Black History month observances.

“No Easy Road to Freedom: Lessons in American Diversity”

After “Freedom Riders” I was asked to write another play the following year that I expected would be seen by the same audience.  I wanted to show that the issues of diversity were not just about black and white but were a broader spectrum.

Including Matthew Shepard was important to me.  The play was first written very soon after his death and allowing students to make connections to gay rights was vital.

The characters all come from history - except for the students.  By including students as I was hoping they can see themselves in the show.

Diversity has a wide meaning and all people seen as “different” should be included. This was the 3rd play in a trilogy and written one year after “No Easy Road.”  I was trying to boil down the historical argument about Civil Rights using the two main voices of the era.