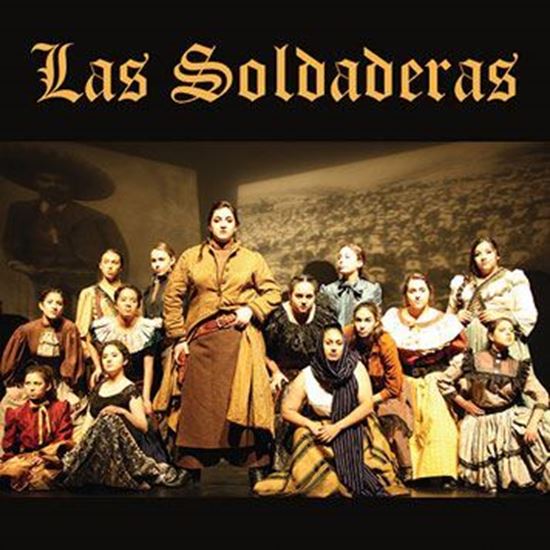 Set in the Sierra Madre Mountains, this historic drama follows the lives of an intrepid band of female guerilla fighters who choose to pick up rifles to defend the poor and disenfranchised from the clutches of the corrupt Mexican government and their soldiers. The play explores what it means to be a woman, known as a “soldadera” (female soldier), in the face of great adversity, for they battle not only the enemy but also their own memories of loss, love, family, and betrayal. Each character allows a different facet of womanhood to shine -- innocence, first love, motherhood, independence, commitment, and loss. “Las Soldaderas” is filled with the strength, love, and commitment women develop with each other when they must work together to achieve a common goal: to defend the people from the rich landed gentry and gain absolute freedom.

PLAYWRIGHT BY NELLY E. CUELLAR-GARCIA TALKS ABOUT HER PLAY

A: The concept for this script began as a need to find a powerful show for 15 strong actresses to perform. On top of which, since we are a Title 1 school in the middle of deep South Texas, I wanted a piece that would allow my students to connect to their ancestral roots. When we began our discussion of warrior women, their initial ideas and imaginations naturally flowed to what we have studied and learned about in the theatrical process: Amazonian women, Boudicca-the Celtic queen of the Iceni, and the Trung sisters who trained 36 women to be generals and drove the Chinese out of Vietnam. All these women had the same commonalities: strength of character, belief in their duty and destiny, and most importantly an idea that in working together nothing was impossible. When I introduced the term “soldadera” and asked them to tell me what they knew about them, they were absolutely mute. Not one child recognized that these women were actual real historical figures of the Mexican Revolution, and as simply as that the idea for my next show was created.

A: Researching these women became an arduous task simply because the information was minimal at best. Some books simply described them as women who followed their husbands into the battlefield cooking and taking care of the camp. But the reality was so much more, these women picked up the rifles of the fallen men and took their places on the line. Slowly, women climbed the ranks of the Revolutionary Army to become generals in their own rights. Many were granted land parcels by the government when the war was over as their right for serving in the revolution.

A: I started my show with the women literally humming and emulating the whistles a train makes as it starts its journey; then they started singing the song The Adelita. Many of the soldaderas travelled by train to their initial destination before they joined a unit, so our humming was an homage to that. Also, we slowed the pace of The Adelita song down and made it into a ballad, for it was more effective to the marching style we adopted for the opening scene. We created a march that was reminiscent of prized stallions prancing on a parade route, and maintained our right leg in the air for the final line of the first verse “enamorada locamente del sargento” before we brought it down in a forceful stomp. Concepcion then started her initial lines. In this revolutionary culture, being able to stand on one leg for a long period of time without quivering or swaying showed the enemy the revolution’s fortitude and strength.

A: We also wanted to incorporate projections into the show that actually depicted the women of the revolution. These images were quite effective in the soliloquy and monologue scenes. There are many black and white photos of the revolution that are in public domain that serve this purpose admirably. The plot of the show is written to have occurred in a 24 hour period. The show begins during dusk and ends the following day at dusk with a red glow of a setting sun on women who are about to face their death. We tried to depict the landscape of the Sierra Madre Mountains and created beautiful Cacti to accompany the changing sky. All our music was organic and provided by a guitarist who created original ballads for the show.

A: The ensemble in the show acted as the glue that held the piece together. It was their ensemble and the portrayal of daily life behind the main actors that enabled the piece to have a realistic feel. It is imperative that every ensemble member is believable in her actions.

The director should avoid stereotypical costume, dress, or mannerisms. This show is about war and the effects the war has on these women. This unit is a fighting unit that is on call at all hours of the night.

I encourage the director to use color-blind casting in this show. This piece is about strength, dignity, and sacrifice. These concepts know no racial or ethnic boundary. All should be encouraged to explore this historical drama.