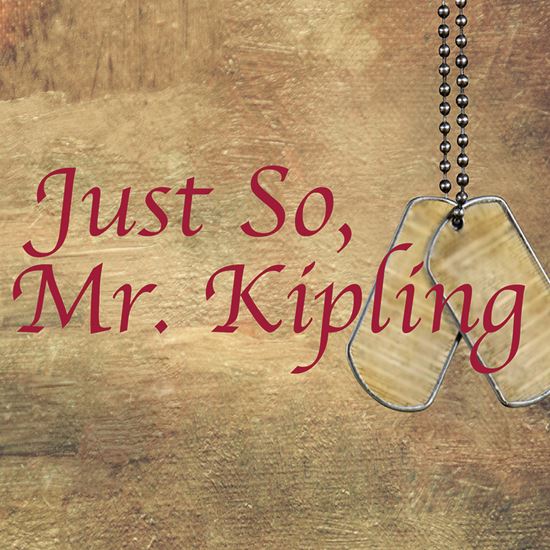 Inspired by the life and works of Rudyard Kipling. Celebrated author Rudyard Kipling is shocked after receiving news that his only son John is missing in action in WW I. Kipling bottles his grief, throwing his focus on a new book. Suddenly he’s interrupted by a mysterious little girl named Priyam. Charmed by her innocence, he shares his famous story “The Jungle Book” with her. As the tale of Mowgli springs to life, Kipling’s own memories of how John became a soldier start to intertwine. As truth blends into fiction, Rudyard’s memories shift to nightmares. He finally purges a painful secret, and Priyam reveals the true reason for her visit. Many of John Kipling’s lines, especially the monologues, are pulled directly from his own letters. Many direct quotes from Rudyard himself are also incorporated throughout the play. This beautiful ensemble drama will entertain all audiences and educate and challenge any theatrical artist. (Optional song, "The Letter," available. #2356)

LISA: Another theatre group was looking to offload an extremely large and beautifully built crocodile puppet. The photograph looked impressive, and they suggested we bring a truck. Instead, I drove my Ford Escape, figuring we could move the seats and get it in the back. It took three people to cram the croc in the back of my Ford – and it just barely fit. My sweet husband Todd was surprised by the sheer size (the photo didn’t do it justice) but allowed the croc to live rent free in his workshop for an entire year. When I was trying to come up with a show idea for summer, I announced, “I’m going to write a play about a crocodile! Todd suggested Rudyard Kipling’s “Just So Stories.” And, honestly, that’s how it all started. The croc did a very good job in our premiere production with special thanks to puppeteer, Maggie Dickinson, but didn’t make it into the published version of the play. The croc drew me toward Rudyard Kipling, but it was the book, “O Beloved Kids: Rudyard Kipling’s Letters to his Children,” edited by Elliot L. Gilbert, that was the real inspiration. Reading the actual letters between Rudyard and his children opened the door to a new story that was so much bigger than a croc puppet.

WHAT’S YOUR FAVORITE PART OR LINE IN THE PLAY?

LISA: The moment Priyam reveals her objective to Rudyard. It affected me deeply when I was writing it and was equally powerful to see performed on stage.

TELL US ABOUT THE CHARACTERS.

LISA: Rudyard, John, Carrie, Frank and Bobs are based on real people, of course. Many of John Kipling’s lines are pulled directly from his own letters. The monologues are almost entirely John. I also incorporated quotes from Rudyard throughout the play without worrying about times, dates or context. I just wanted his beliefs and ideas to have a presence in the work. Reading Rudyard’s letters to his children helped me find his voice. Writing him was a transcending experience.

Mowgli, Baloo, Bagheera, Kaa, Akela, Messua, Buldeo, Mother Wolf and Shere Khan are all characters in “The Jungle Book.” It gave me Mowgli’s voice, along with the other characters in those famous stories. I did invent some new characters and expand and modify dialogue in order for the Mowgli story to fit into the Rudyard and John story.

LISA: I wanted to write an ensemble play that would educate and challenge a team of artists in some way. I hope to have sparked an interest in research. Rudyard Kipling is a wonderful writer – and also a fascinating, complex person. If you understand his life, you will better understand the choices he makes in this play. I would also encourage directors to fully embrace the Indian themes. It’s a lot of fun! The premiere production included traditional dance, hand mudras and henna. Finally, this play provides opportunities to explore stage dialects and mask / animal essence work.

LISA: I don’t know if I’m the only one to ever make this connection, but I found something stunning in my research. After reading the final few letters John wrote to his father before he died, he mentioned that he lost his identification discs (i.e., dog tags). Knowing that parcels didn’t arrive very quickly during war time, I believe it’s not only plausible but likely that Rudyard either never sent – or John never received – his new discs from his father before he died. I cannot fathom the kind of guilt Rudyard must have felt knowing his son’s body couldn’t be identified because his discs failed to arrive. It’s a sad – and beautiful - example of how the greatest drama can be found in our own history. My discovery of this through John’s letters became the core theme in my play.