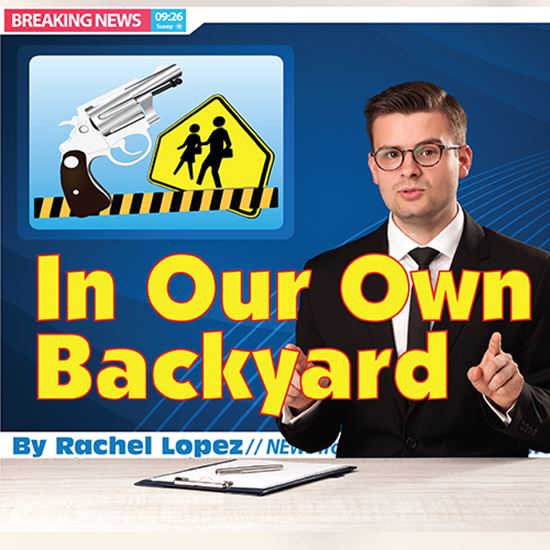 When Chris, a popular, straight-A student, suffers the loss of his younger sister in a hit-and-run accident, he is left to struggle through the remainder of his high school career. But Jake Simmons, the star quarterback and class bully, won’t leave him alone and begins to torment Chris about his personal tragedy while taking bullying to a whole new level. Haunted by his sister and reeling in his pain, Chris decides to take matters into his own hands. In Our Own Backyard tells a story of profound loss, personal tragedy, teen angst and violence amongst a group of teenagers navigating their way through a very challenging time -- one week prior to a school shooting and one year later.

IN OUR OWN BACKYARD

A: My decision to write about bullying and school violence was twofold. In my work, I spend a lot of time with students ages 12 – 18 and they often express to me their personal experiences with being bullied. I was shocked at how prevalent it is and how little is being done about it. I knew my students could get behind a play that addressed this issue so I started the story based on feedback I received from them.

The climax of the play, unfortunately, came from an incident that occurred in our community approximately two years prior to my writing the play. There was a shooting at a local middle school that claimed the life of a beloved teacher and wounded two students. The shooter then took his own life. Immediately following the shooting, reports came out on how the shooter had an abusive home life and was constantly bullied at school. The two students who were wounded reportedly were the ones bullying the shooter. The teacher was shot trying to protect one of the students.

Sadly, this tragedy is being played out across our country and in our neighborhoods and communities multiple times a year. The title came from me overhearing people talking about the shooting and their shock and awe on how it happened “in our own backyard.” Once I had the title, the story just easily unfolded.

A: My favorite part is near the end when Chris is sitting in a jail cell and Cassie is next to him. She isn’t dancing anymore; she just sits calmly next to him “in spirit.” He is devastated by his actions but her words and presence comfort him. The idea for this scene came from my own personal experience. I endured a tremendous loss 18 years ago when my father died suddenly. He was my best friend and my life was forever changed by his absence but once in a while, in moments of crisis or sadness, I feel him around me and I find comfort in talking to him. Which brings me to my favorite line. It is Cassie’s response to Chris when he turns to her and looks directly at her for the first time in the entire play. Holding back tears he says, “I wish you were here,” and she simply responds, “I am here.” That moment makes me emotional every time because I know if I could hear my dad when I attempt to talk to him that is what he would say to me.

A: Some of the characters came from my memories of high school and others from my students describing the bullies at their school. What fascinated me was how not much has changed over the last 30 years when it comes to the high school social scene. The cliques and social groups are pretty much the same.

A: My goal was to create a story that would be hard for the audience to shake after leaving the theatre. I hoped to create characters that were familiar and relatable while weaving them into a storyline that would keep the audience guessing up until the final moment of the play. I also wanted to shed light on the epidemic of bullying and give some insight as to the why behind the bullying and school violence. Creating theatre that promotes discussion and brings awareness to relevant matters affecting today’s youth is my focus.