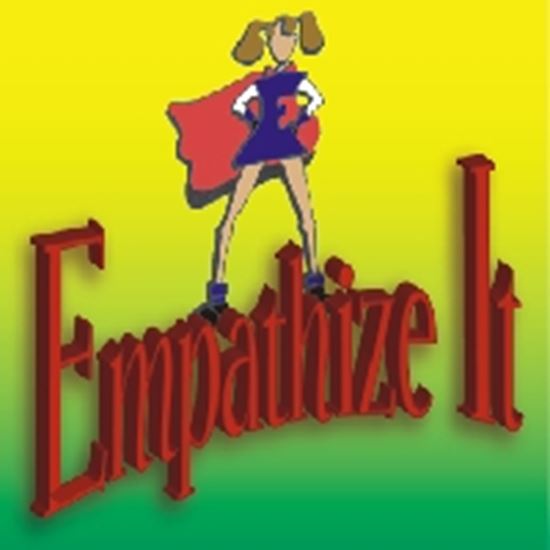 Alden and Sidney find themselves developing an unlikely friendship having been marked as outcasts by the “in crowd” at school. We see through their eyes what it is like to be ridiculed and picked on, what it feels like to have your “friends” turn on you because of one simple misstep. But just when life seems most bleak, enter a hero: a quirky, awkward, fun-loving, larger-than-life, sure-to-make-you-laugh superhero for the new millennium: Empathy Girl! Though unable to fly, lacking superstrength or speed, and a little hypoglycemic, Empathy Girl isn’t without a few tricks up her sleeve. She helps Alden and Sidney learn that understanding the enemy is the first step toward taking back control of their lives. They help show us that living in fear is worse than facing those fears. If united we stand, the bully will fall! Performance time about an hour.

TALKS ABOUT “EMPATHIZE IT”

A: I needed a play for my high school drama class. I had only two boys in the class and about 15 girls. Rehearsal time was also very limited. We were brainstorming about topics that they felt were important and affected them in their lives. The topic of bullying came up. At the same time I had a conversation with our middle school principal about some problems they were having with bullying. The high school kids were excited about the idea and we even talked with some of the middle school kids to find out just what kind of bullying they were dealing with. While the subject is a serious one, I love humor and I was hesitant to get too heavy-handed with things. Kids will just turn you off if they think you are preaching to them ever notice that? But as Miss Mary always sang, “Just a spoonful of sugar helps the medicine go down.” So I added Empathy Girl and used some comedy to help the message go down.

A: For humor - I love when Empathy Girl makes her entrance. For fun gotta love the girls’ karaoke and guys’ sword fight. For poignancy when Alden confesses to Sidney who he hates the most.

A: The characters are not based on any one person (although Mrs. McConnelly will probably be me in a couple years!) but I’ve had people who have seen the show tell me how they identify with certain characters or how a character reminds them of someone they know. I did some research and talked with the kids about things to try to keep it authentic for them even though it was fantastical at times.

A: I wanted kids to realize that they hold the power to end bullying. Whether they are the spectator or the target, they are the ones that can make the difference. It is so important for kids to realize that if they stand by and do nothing while someone is being bullied, they are actually part of the problem. We rationalize bullying by chalking it up to a right of passage. True, for some it might be an experience that teaches them how to be strong and persevere against adversity. But some never recover. Their lives are changed because instead of bouncing back from the bully’s harsh words, they took them to heart and believed them. I hope “Empathize It” will help kids realize that standing up to a bully isn’t as bad as not standing up to one.

A: I was very nervous when my students first read my script. I wasn’t sure how it would come off to them. I will always be grateful to them for their immediate and unwavering support of “Empathize It.”