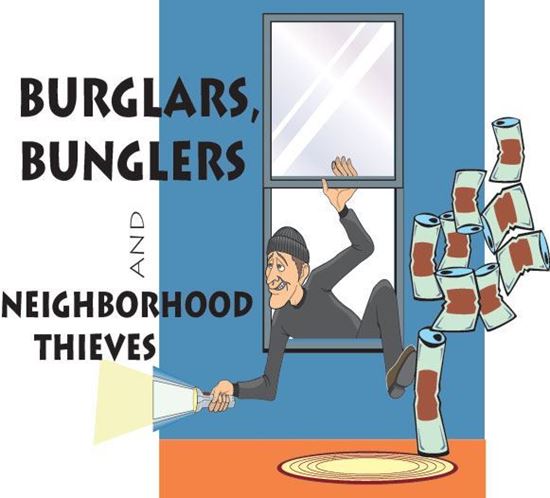 When two big-time bunglers like John and Darlene attempt to burglarize an apartment, they get a coat hanger stuck in the door lock and then manage to accidentally ring the doorbell. When they do finally break in, Darlene's nervous bladder forces her to make an emergency bathroom visit. All this ruckus wakes up the bunny-slipper wearing homeowner, Erica, who discovers she is being burgled by her own husband. And if this wasn't weird enough, Darlene claims she is really a "cat burner" instead of a "cat burglar." All this, and the show has just begun! Is John really trying to steal his own Picasso painting to collect on the insurance? Or is he after the neighbor's jewels? Do the two old neighbor ladies really have valuable jewelry, or are they just trying to steal the Picasso for themselves? Will the police officer stop these crimes in time? But who is the real police officer? All of these bunglers may not be great burglars, but they're certainly the funniest!

A: The school where this play was initially done inspired it. I had been a guest speaker at the school's drama club, and in that meeting, they asked if I knew of any one-act mystery/comedies, as that was what they wanted to do for their area one-act competition. I had some suggestions, but I knew at that moment I would try and write one myself (I love a challenge). I spent the night awake, thinking and plotting, and then wrote the first draft the next day. I don't think I've have ever written a complete work in one day before. It went through a number of changes, of course, before it became what it is now.

A: I love the two old neighbor ladies, Agatha and Christie. Believe it or not, the first couple of drafts of this play did not have these two wonderful characters. My favorite line while writing one of the drafts was "Agatha, Christie, would you stop being so mysterious and just tell us ." but since I watched the first performance, my favorite lines have become, "I know how to spell Picasso . M-O-N-E-Y" and "Isn't that Monet? I thought we were looking for a Picasso ." The young actress who first played Christie had a wonderful sense of timing and really made the line click for so many people. It often got the biggest laugh of the show.

A: I still remember the first complete story I ever wrote, when I was 8 years old. I've been writing ever since (35 years).

A: I LOVE the theatre. I love everything about theatre, so it is only natural that I write for the theatre. I am an Actors' Equity Association Stage Manager and have worked on Broadway, Off-Broadway, and all around the country. I stopped doing that to be home with my young children, but I couldn't stop being involved in the theatre. It seemed that the best way for me to stay involved was to go back to my writing roots and really focus on playwriting. I have lived in Los Angeles strictly as a freelance writer -- writing everything from film and television scripts to theme-park scripts to book reviews -- but writing plays is still my first love.

A: Creating characters that come to life is probably the most exciting thing for me. Theatre is the only medium where a character is made of flesh and changes with each show (film and television would be different on repeat productions, but making a movie more than once is still quite rare). Every actor and director brings something unique to a play and a character. How truly exciting that is!

A: Facing a blank page. Whether it's the start of a whole new work or the point where I stopped writing the day before, it can be a real challenge to look forward to where there is nothing and to think that it is my job to replace that nothingness with something new and creative.

A: First, know why you're writing the play. What is the purpose for telling the story that you're telling, and why a play rather than some other form? Second, understand the demands and limitations of the medium of theatre. It is not practical to have a cast of thousands, breakaway sets, and sixty different scene locations. Of course some plays do, and this is fine, but it's probably not a real good place to start. Third, know your audience. Who are you writing this play for? Make sure you keep your audience in mind when creating characters and dialog. And fourth, JUST WRITE IT! Don't be afraid to write it down. It is the extremely rare writer who doesn't rewrite, but you have to have something written in the first place in order to rewrite from it.

A: In a sense, every character is a little bit of me. When I write a play, I have to be able to picture the characters and hear the lines being spoken (it is not uncommon for me to be pacing in my office, speaking the lines out loud). To do that, I have to be able to understand where the character is coming from, which is why I say that there is a little bit of me in each character. I do try to give each character a unique trait. Sometimes it's a physical trait like a tic or a limp or a head always cocked to one side. Sometimes it's a speech pattern. Sometimes it's an emotional state. I will draw on people I know with similar traits when applying it to my characters. Also, because I need to visualize the script as I write it, I often imagine people I know or have seen performing the roles. This helps immensely, even if they are unlikely to ever perform the role.

A: I try to entertain. I am doing what I can to make the theatre experience an enjoyable one for all involved with the process. A play (comedy or drama) entertains by unfolding a story. Whether the audience is laughing, crying, or scared, the entertainment value comes in the sense of wonder at what is going to happen next, and how it will all end. I try to write characters and stories that will keep an audience interested and is fun but challenging for the performers.

A: My spare time! Ha! When I'm not writing or playing board games with my family, I listen to old-time radio shows, paint, draw, or do woodcarving. My biggest hobby is 3D photography - I own five different 3D types of cameras. I am also a frustrated musician -- I wish that I knew how to write music and that I had more time to practice my banjo, piano, and drums.