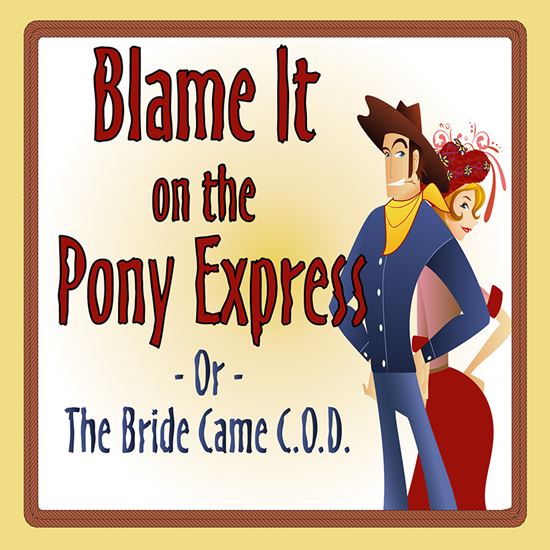 Gideon Culpepper opens the Last Chance Inn and the guests pour in immediately! Dashing Horace Prickley agrees to help poor flower-peddler Flossie McDurdle become a lady, so she can win her heart’s true love, the spineless but wealthy Theodore Vanderthistle. Teddy’s scheming mother, Vedalia, has other plans though. She sends for Posey Lee Perriwinkle, a beautiful Southern belle who arrives via Pony Express as a mail-order bride. Unfortunately, Posey falls for Gideon instead. Meanwhile Horace finds that he is falling for Flossie and facing the dilemma of helping her and therefore losing her to Teddy. This clever play, a prequel to the other Calamity Gulch comedies, weaves together elements of “My Fair Lady” and “Gone with the Wind.” About 80 minutes.

BLAME IT ON THE PONY EXPRESS

A: I’ve been very fortunate in that many schools and the community have been performing my Calamity Gulch plays annually and, sometimes, in order. I was contacted by three theaters about the possibility of another play in the series.

A: Pa’s rocks and his horse, Algernon, along with Ma’s hat were all separate elements of the story that just ended up being important somehow. I love when things like that just happen and it looks like I wrote it that way intentionally.

A: Of course, for this play, many of the characters are from the other Calamity Gulch plays. It was a challenge to write for Horace before he becomes a villain. It was also tough to create Flossie as a character who would eventually turn into Sahara Hartburn. Lastly, it did pain me that there was simply no way to add Sheriff Prettyfoot to this storyline.

A: I tried to write that something that was fresh and different, but that was still true to the series. Something that could stand alone but also complement the other plays.

A: Calamity Gulch has been the inspiration for a trilogy, a spin-off, a prequel and four musicals. I feel ready to leave the Gulch – if only it had a train depot!