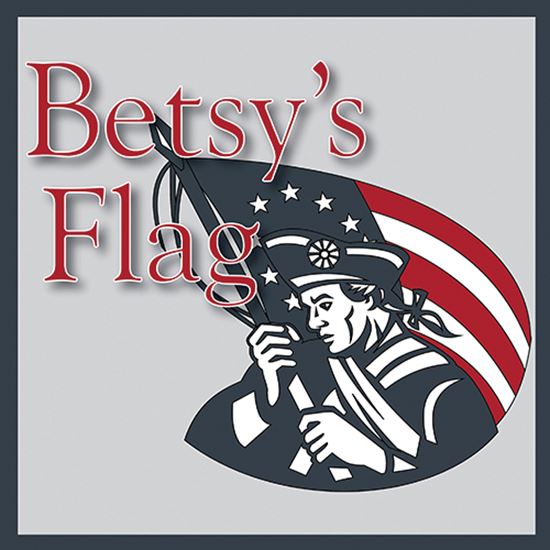 Far from being a demure woman quietly sewing a flag, the epic life of Betsy Ross and her survival during the Revolutionary War and the British occupation of Philadelphia is brought vibrantly to life in this full-length play. It is a romantic story of heroism against the background of a great, world-shattering war for independence. The story is told through the eyes of John Claypoole, boyhood friend of Betsy's, in love with her from the start, who is also a soldier in Washington's army. Wounded at Germantown, John became a sailor and ended the war in the British Old Mill Prison in Plymouth, England, and survived to become Betsy's husband. While Betsy's life is portrayed in action in the scenes of the play, John Claypoole provides scenes of the progress of the Revolutionary War, so that we see how Betsy's life parallels the historic events of 1773 to 1782.

A: I was inspired to write “Betsy’s Flag” because I grew up in Southwest Philadelphia, one city block from Mount Moriah Cemetery, where Betsy Ross was originally interred. In my youth, I often attended on Memorial Day, when veterans of the military would assemble and fire rifles over her grave in memory of the heroine who made their first flag. (I don't know how or when her gravesite was moved, but I understand it is now located at Second and Arch Streets, on the grounds next to her home and place of business.)

A: My favorite part of “Betsy’s Flag” comes near the ending when John Claypoole tells Betsy of Joseph Ashburn, and says, "I did my best to bring him home." The fact is, John knows how much Betsy loved her second husband, Joseph Ashburn--and John loves and respects Joseph--and even though John also loves Betsy, he respects her choices and feelings very much, and is more concerned for her happiness than his own. John Claypoole is an honorable man, the kind of person we think of as when we sang that little song learned in kindergarten, "I'd like to be the sort of man the flag could boast about; the kind of man who sees whatever we're without; the chap who's ready for a fight, whenever there's a wrong to right—"

A: The characters in “Betsy’s Flag” all come from history--from reading the many books about Betsy and the origin of our flag--from research. But where does a playwright's representation of characters come from? Of course it comes from the totality of a writer's experience of people and life, from his/her education, upbringing, and learning. I try to depict historical characters from all that I can learn about them, but inevitably, my own ideals and prejudices about people enter in.

A: In “Betsy’s Flag” I tried to be historically accurate, and I also wanted to portray a Betsy who was courageous and fully human--a survivor who met adversity and life with energy and determination--a loving but practical lady--the same kind of woman I could fall in love with and wed. Come to think of it, I have to admit she reminds me of my own wonderful wife, Marion Gloria Angelitis Vail, who left this earth at age 62, twenty-six years ago--and also reminds me of the wonderful companion of my later years, Betty-Lou Joy Winston.

A: What more could I possibly say? Just that I love playwriting--I can't stop doing it!