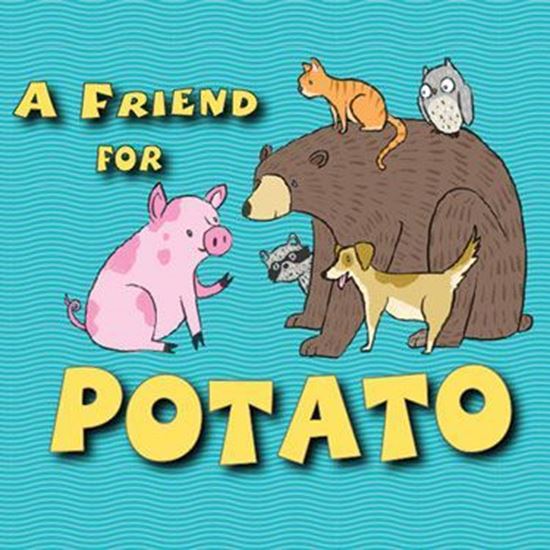 A Friend for Potato

Potato the pig just wants a friend —but doesn’t know what that word means. With help from his friend Casey, Potato sets out to find a friend. It’s a seemingly simple quest that quickly turns into a house full of scheming cats, energetic dogs, a few friendly bears ... and who invited the Singing Raccoons? Not Casey’s parents, that’s for sure! Underneath all the wackiness, A Friend for Potato is a look at what friendship means, and what it takes to be a good friend. About 40 minutes. No specific set requirements.

My wife runs a youth theater camp. For years, I watched great kids' plays being performed, and although I had already written several adult plays that had been produced numerous times and published, I would tell myself that writing for kids just wasn't something I could do.

One day I bothered to ask myself why not—and I didn't have a good answer. So, I set myself a goal. I would try to write my first (and thus far only) kids' play with the intention of giving it to my wife as a Christmas present for her program to perform. I soon discovered that I was actually having a great time writing something that could just be joyous and silly and fun and smart. I wrote it without her knowing (thank you, online storage!) and finished the play in late November that year. It was the last thing she opened that Christmas, and it was a hit!

I love the line, "Well, he is made of bacon." I honestly laughed out loud when I wrote it. That line is mostly for the parents in the audience because having sat through so very many kids' shows, I know you have to give them something. It's guaranteed to get a delayed-reaction laugh as people make the connection. I love those laughs the most. As a playwright, when you can craft a moment where the audience needs a second to figure out what you just did, and then the joke lands and they bust out laughing, it's an amazing feeing. You've got them on your side!

These characters all just came from the sense of play I was enjoying by diving into the possibilities of this place that was new to me. As each new idea popped up for what animal should come next, I wanted to make them big so the kids would have fun playing them. Although... Jinx's attitude may or may not be loosely based on our cat, Ella. If she finds out, I'm in trouble.

When I first started to write it, my intention was to get as many kids on stage as I could, and give them all something to do. (The first draft was called "The Problem with Having Ten Elephants.") I wanted it to work for a camp production where the cast sizes can run pretty big. That goal was set aside as I got deeper into the story and the characters and I realized that what I wanted and needed to do was write something with a big heart, and that became the guide that made the play real.

Having accomplished what I challenged myself to do, I wish I'd done it sooner and more—for my daughter, who's been acting since she was 3 (and is now in high school). I've watched a lot of actors speak my words over the years, but to have her up on stage performing something I wrote was an experience absolutely carved in gold.